Home » Latest Industry News » Can you Gift Equity Release Funds to your Family?

Can you Gift Equity Release Funds to your Family?

Please provide a post code.
0 / 180
This form will redirect you to another page once submitted. 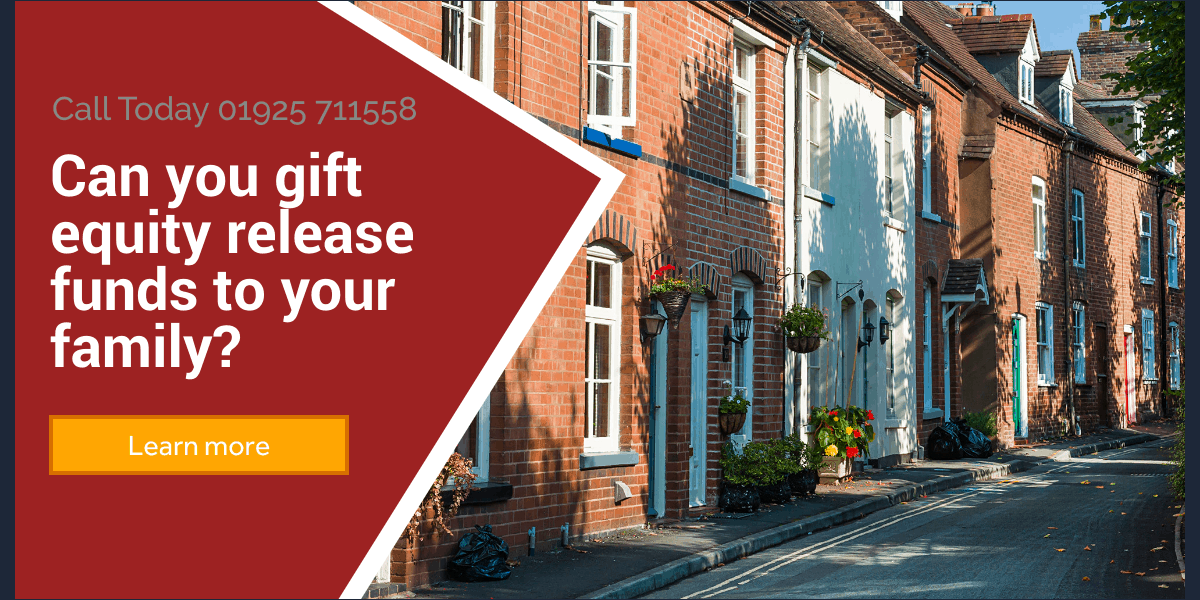 There tends to be a number of myths and misconceptions around Equity Release and how it works, products in this market have evolved greatly in more recent years.  We are keen to understand how equity release can be used to help get a deposit together and maybe help out a family member who would otherwise struggle to get on the property ladder.

How long have you been doing what you do?

I myself have been in the industry for 40 plus years, so I’ve got a really good background both in the industry and equity release since joining the family business, which was launched in 2008.

Why do you believe equity release is a good mortgage product?

I’m passionate about equity release because I do think that there’s a time and place where this is suitable for people. I’m conscious that in the past, previously, people have been given some horror stories about equity release. I prefer to put the record straight and tell them exactly how equity release can help them and in a very regulated way.

Previously equity release used to be more about the home reversion scheme, which is where you gave up some or all of the ownership of your property in return for a lump sum. Often when someone passed away, the families felt that the parents had sold their properties for significantly below market value.

There are  various schemes now to prevent that from happening. And that’s where I fit in, because that’s the part of equity release that I do feel passionately about.  There are various different reasons, both for the person releasing the equity, or sometimes to give family members an early inheritance so that they can do what they need to do right now rather than to wait until parents have passed away, perhaps.

Is Equity Release a good way to help a family member get on the property ladder?

Absolutely. I think we are particularly sensitive to this subject during a pandemic as it has had a significant impact on the mortgage market. First time buyers now are often having to fund a 15% deposit to try and buy that first property because the number of lenders out there that were offering five or 10 percent deposit mortgages have withdrawn from the marketplace at the moment.

So that’s really where equity release could come in. Because it’s an opportunity for families to help their children actually get on the property market now, when they need the help the most.

Even if five percent does become more standard again it is still difficult to raise that sort of deposit money, isn’t it?

Yes, it is. And then there’s the cost of setting up a new home as well. That needs to be factored in, as well as the purchase costs.

If someone is gifting the deposit money using equity release, can the child pay the interest on that?

It’s possible for the children to pay the interest. That’s perfectly acceptable by the lenders. That’s not an issue. There is flexibility with equity release. The actual equity release mortgage plan can either be interest paid, partial interest paid or interest roll up. So there’s quite a lot of flexibility there. And the lenders are quite happy for those who benefit from the gifting to pay the interest on that money.

If there is more than one child can safeguards be put in place to ensure other children don’t miss out on inheritance?

Yes, you can do what’s known as an inheritance guarantee on the equity release, which means that if perhaps the interest is being rolled up on the funds being released, then at least the parents or the owners of the property know that there will be a specific amount of money left over when they do pass away that can go to their beneficiaries. And then obviously it would need to have the support of a will to make sure that you know, it’s the relevant people who benefit from that money after the other person has had it early.

Would the purchased property be linked in any way, if something goes wrong?

Absolutely not. No, it’s quite simply the equity release is secured on the parents property. A mortgage will be secured on the sons or the daughters property, and there’s no link between the two. It’s not secured against the parent’s property in any way.

If the child wanted to pay off the equity release, is that possible?

It’s possible, but you do have to be mindful about the repayment penalties that would apply to the equity release. Quite often you will find that some of the lenders have a lifetime early repayment charge that’s applicable, which is only generally waived in the event of somebody going into long term nursing care or if they were to die prematurely.

Obviously, there are other equity release plans that have a fixed early repayment term, which typically is for ten years time. The penalties are on a reducing scale, depending on how far into that ten years you are, typically you’d be looking at maybe anything up to about 8% in the first five years and then maybe 5% perhaps dropping to 3% for the remaining five years, just as a very broad example.

If somebody said that they’re not intending to pay this equity release off, then you might go for something that’s got a cheaper rate but has a lifetime of penalties attached to it. Whereas if on the flip side, there is an intimation that the equity release deposit funds may be paid back, then we may want to recommend something that’s got shorter penalties attached to it.

So we have spoken about equity release for a mortgage deposit, can it be used for anything else?

Yes, it is possible.  Equity release can be used for any legitimate purpose as long as it’s not for business purposes. So if parents want to help children that are struggling financially and they want to give them a lump sum so that they can perhaps clear their credit commitments, you know, or pay off mortgage arrears, that’s perfectly acceptable. We just need to understand what it is that they want the funds for so that we can satisfy ourselves that equity release is the right thing for them.

Would Equity Release rates be lower than the rates of interest on the debts?

As an advisor, I would look to have a conversation with the children to see, is there an alternative that I can help them with as opposed to them getting their parents to release equity from their property. When children are paying off credit, it’s unsecured debt in the main. When you do end up paying that off by using something like an equity release, I have to consider the longer term effects of making that unsecured credit secured credit, and about the impact of spreading it out over a longer period of time, rather than them paying it off over a shorter period of time.

So there’s a little bit more that’s involved in that to make sure that we have explored all the options before recommending that, even though it’s indirect unsecured lending, because it isn’t the parents’ unsecured lending, I would still have a responsibility to make sure that I have looked to see what I can do to help the children before converting that unsecured credit into secured credit.

If you go to just a broker that’s specialised purely in equity release then that’s the only advice that they can give. Whereas somebody like myself, I’m qualified both in equity release and also your standard residential mortgages, your buy-to-let mortgages. So I can give somebody the benefit of the best advice across all spectrums.

What implication if any does gifting have on inheritance tax?

Whilst I’m not a tax expert, I can tell you that if money is gifted away by a parent, then there is still an inheritance tax liability that exists if it exceeds the annual allowances that extends to seven years past the date of the gift. So if something was to happen to the giftee, but within the next seven years, there is a tapering inheritance tax liability that may be applicable. The way to mitigate that, is to take out some sort of insurance policy for seven years, so that if something did happen, then the inheritance tax liability is at least covered by the insurance policy. Sometimes people don’t want to incur that extra cost, which is fine, as long as people understand the implications and they plan for it just in case.

What other things do I need to think about when considering Equity Release?

When do you need the money? How much do you need and why? I have to look at the interest that they’re being charged if they were just going to draw it out and pop it in the bank, perhaps for that rainy day. Well, that rainy day might not come for the next 10 years, in which case, they’ve paid interest on that money that they’ve never really used.

It’s really important that, whoever’s taking out the equity release plan, feels comfortable to do so that they do involve other family members on those conversations so that they themselves will have the opportunity to ask any questions. That way I can give the right advice to both sides.

1
We use cookies on our website to give you the most relevant experience by remembering your preferences and repeat visits. By clicking “Accept All”, you consent to the use of ALL the cookies. However, you may visit "Cookie Settings" to provide a controlled consent.
Cookie SettingsAccept All
Manage consent

This website uses cookies to improve your experience while you navigate through the website. Out of these, the cookies that are categorized as necessary are stored on your browser as they are essential for the working of basic functionalities of the website. We also use third-party cookies that help us analyze and understand how you use this website. These cookies will be stored in your browser only with your consent. You also have the option to opt-out of these cookies. But opting out of some of these cookies may affect your browsing experience.
Necessary Always Enabled
Necessary cookies are absolutely essential for the website to function properly. These cookies ensure basic functionalities and security features of the website, anonymously.
Functional
Functional cookies help to perform certain functionalities like sharing the content of the website on social media platforms, collect feedbacks, and other third-party features.
Performance
Performance cookies are used to understand and analyze the key performance indexes of the website which helps in delivering a better user experience for the visitors.
Analytics
Analytical cookies are used to understand how visitors interact with the website. These cookies help provide information on metrics the number of visitors, bounce rate, traffic source, etc.
Advertisement
Advertisement cookies are used to provide visitors with relevant ads and marketing campaigns. These cookies track visitors across websites and collect information to provide customized ads.
Others
Other uncategorized cookies are those that are being analyzed and have not been classified into a category as yet.
SAVE & ACCEPT
Powered by

We offer a free no obligation quote for all our enquiries.
Contact Us